PAGE ONE OF TWO 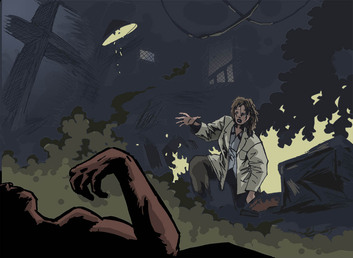 Wendy slowly regains consciousness amidst a tangle of smashed concrete, wood splinters and wire. She is wearing a lab coat, torn and covered in soot. Twisted parts of machinery give off sparks and flames around her, and dark greasy smoke slowly fills the room. Her ears are ringing with a high pitched whine.
She can feel her head throbbing along with her speeding pulse, like a bass drum beneath the ringing in her ears. Thoughts jumble and bounce across her mind like tumbling dice. What happened? Where was she? An explosion- With agonizing slowness she rises to a sitting position and looks around through dazed eyes.
The room seems to spin wildly around her. Shapes contort and move in and out of focus in her vision. Wendy tries to rub the soot from her eyes, and when she lowers her hands they come away bloody.
Wendy stares at her bloody hands for a long time. The room sparks and smokes as she sits in a daze. A slow dawning horror grows within her. The EXPLOSION. Suddenly she turns back and forth, eyes casting about the room.
"Desmond? DESMOND!!!!"
Grimacing in pain, Wendy begins to drag herself through the rubble, searching for her husband. She tries to get a fix on the place where she last saw him and head in that direction. Broken glass grinds into her knees as she crawls beneath the smoke. The smell of burnt plastic stings her nose. As she drags herself past a blasted workstation she sees a computer monitor, somehow still intact - the phrase “transmission aborted” pulses across the screen between waves of static. Wendy tries to call out Desmond’s name but her cries deteriorate into wracking coughs as more smoke fills the space. Flames begin to rise from different corners of the room, along with the sound of metal warping in the rising heat.
Wendy is scrambling more frantically now, blood streaming down her face as she tries to choke out Desmond’s name. The heat is sizzling her hair and searing her eyes, spreading tears that fall and mix with the blood. She has to find him! And then, like a dirty secret, the thought arrives for the first time - of giving up, of leaving him here and saving herself. She squeezes her eyes shut and pushes that thought away. Where is he? Find him!
Then she spots a shape lying between two pieces of equipment that have been blasted almost beyond recognition - the transformers. The shape is a curled hump, a wavering shadow in the wracking heat and billowing smoke.
As Wendy crawls closer she sees that it is the body of a naked man, lying on his side, smoke curling up from his flanks. She pulls herself up to the body and turns him over.